What is Age-Related Macular Degeneration (AMD)

The term Age-Related Macular Degeneration (AMD) refers to a chronic eye disease linked to the natural aging of the cells in the macula.

The macula is the central area of the retina of the human eye which, characterized by a high density of light-sensitive cells (photoreceptors), is essential to the distinct vision and perception of details.

Extremely sensitive to light stimuli, the macula undergoes a process of degeneration over the years. The cells of the macula responsible for one’s central vision are in progressive suffering (degeneration) and eventually die, replaced by scar tissue that lacks functionality. 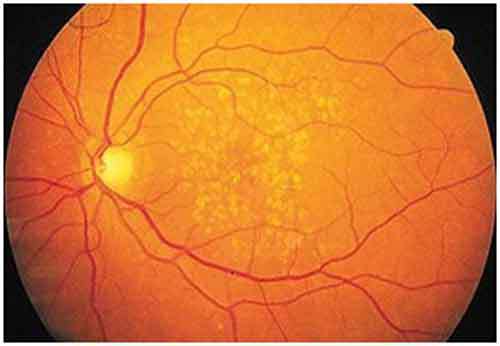 There are two forms of AMD:

– the wet form: it is the most serious and debilitating type of disease (it can seriously compromise the visual capacity) even if, fortunately, it is rare. Only 10% of people with AMD develop the wet form.

It is caused by an abnormal development of some blood vessels in the retinal wall below the macula. If the accumulation of blood and liquid inside the eye is not treated, a rapid deterioration of vision is triggered. Early treatment limits damage however, once the edema is resolved, it remains a permanent scar.

– the atrophic or dry form: it is the most widespread form. Approximately 90% of patients suffer from it. It is determined by an excessive accumulation of cellular waste (called drusen) associated with irregularities of the retinal pigment epithelium. The slag, if not reabsorbed, can calcify causing injury and stable damage.

Macular degeneration is a widespread disease, especially in the western world, industrialized and characterized by general well-being. It is estimated to affect about 25-30 million people and is the most common cause of blindness in patients over 60 years of age. The AMD has an incidence ranging from 8.5% to 11% in the age group between 65 and 74, and 27% over 75 years.

Despite its widespread diffusion, it is a deceitful disease as it is not painful and characterized by not very evident symptoms that sometimes occur only from one eye.

The most common symptoms are visual defects such as distorted vision, black spots in the center of the visual field, distortion of straight lines, reduction of central vision. Added to this is marked photosensitivity (the eye suffers the sudden passage from darkness to light, not being able to adapt quickly), reduced perception of distance and the sensation of needing more light to perform normal daily activities.

For people with macular degeneration, reading, watching television, driving and performing all the daily activities that require a clear and correct vision can be difficult.

Inside the eye structure, the macula is, in fact, responsible for more than 35% of the visual field, so a severe AMD affects the performance of normal daily activities with inevitable consequences on the psychological dispositions of the patient.

Peripheral vision, however, is generally intact and is not at risk until the disease reaches a terminal state.

How to Treat Age-Related Macular Degeneration

Unfortunately, if it is impossible to completely restore sight to those suffering from macular degeneration, the techniques and therapies currently available can significantly halt the progression of the disease.

As mentioned, AMD does not cause complete blindness and it is possible to return to certain occupations independently and productively by resorting to rehabilitation techniques that increase the visual capacity (low vision). Visual re-education makes use of a number of devices such as the use of halogen lamps (preferably bulb ones), magnifying instruments, special telescopic systems, which can also be inserted inside the eye, and learning by the patient of a series of environmental adaptation techniques designed to maximize the residual potential of the peripheral retina.

For several years, to combat age-related macular degeneration, intravitreal injections of anti-VEGF drugs have been used to block or inhibit the proliferation of abnormal blood vessels.

This therapy is performed in the operating room. The drug is injected into the vitreous after a few drops of anaesthetics are instilled. The whole thing takes a few minutes, so the patient can go home quickly.

The functional results are satisfactory. The disease is blocked and in the most fortunate cases, there is also a partial recovery of the lost vision.

Low vision specialists and ophthalmologists have developed a particular lens system to improve central vision in patients with AMD. The IOL-Vip Revolution is the combination of two tiny lenses that are implanted by the surgeon instead of the crystalline lens. They act like a real telescope, slightly enlarging the image on the retina and directing it towards a healthy part. To assess the potential visual improvement before surgery, treatment with an external optical device is simulated that reproduces the magnifying and prismatic effect of the two lenses once inserted in the capsular bag. Patients are helped to manage the new vision with a few simple exercises that can be performed at home. The procedure does not require hospitalization and is performed under local anaesthesia.

However, the selection of possible candidates is strict. This technique cannot be extended to all visually impaired. Furthermore, after the operation, rehabilitation is long and demanding.